On April 8th, Sgt Mark Whaley of the Elgin Police Department was pulled over by a Sycamore Police officer on suspicion of driving under the influence. The investigating officer was Luke Kampmeier with the Sycamore Illinois Police Department.

Upon approaching the vehicle, Kampmeier introduces himself and begins explaining his reason for conducting the traffic stop. He explained that Whaley cut off another driver, used a lane improperly and did not have the required Illinois license plate on the front of the vehicle. Later in the video, Whaley states that the vehicle he was driving was a state vehicle.

When asked where he was coming from, Whaley replied that he had just dropped his daughter and his wife off and that he’d been “coming back from… *long pause*”. Presumably, he stopped himself from saying “the bar”. Moments later after claiming he had no insurance card for the vehicle, he was asked again where he’d been coming from. This time he replied that he was on his way home from training. He admitted that he’d had at least one beer, an hour before the traffic stop and that he was a police officer for Elgin, IL.

Interestingly, after being asked several times if he would submit to chemical testing, Whaley refused saying “I don’t want to take any tests”. No tests were administered and Whaley was arrested.

At 2:06am, Whaley was brought into processing at the Dekalb County Jail in Sycamore where he was booked; the process taking about 20 minutes. Whaley was taken into a holding cell, and by 3:52am, his possessions were released to him and he was set free with no charges.

Sycamore police Cmdr. Mike Anderson, who was on call that night, can be seen in the booking area as Whaley was led out of the police station with a police vest and other property. 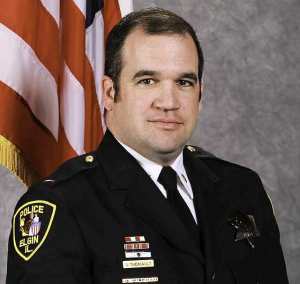 Records obtained through a FOIA show text messages were exchanged by Whaley and Sycamore Police Chief Glenn Theriault. One of the text messages read, ““Took longer than I thought! Tough position for you and all last night.”

Kampmeier wrote in his report that after observing Whaley for a period of time, he decided to release Whaley based on “lack of evidence”. The same “evidence” that he based justification for the arrest and willfully dismissed because he was presumably “just following orders”.